What. The. Hell. I'm speechless.
Book Description:
What would YOU do if your parents didn't come home, didn't call, left no note? At first, Mark and Cara Burroughs aren't terribly alarmed. Their parents have stayed out late before. But other things start to go wrong. Mark's girlfriend Gena breaks up with him and suddenly disappears. The police don't seem at all interested in finding Mark and Cara's parents. And their mysterious cousin who boards with them seems to be spying on their every move! When murder strikes, Mark and Cara learn their terror is only beginning. Someone wants THEM to disappear too! But why? The answer lies deep in the Fear Street Woods. But will they live long enough to find it?
My Description:
Cara, our narrator through most of this tale of DOOM!, begins the story with the party she and Mark were having the first night their parents didn't come home. They're acting like their parents are mental incompetents who need help with everything and don't know their butt from a hole in the ground (judging by the ridiculous cover, the apple doesn't fall far from the tree). She and Mark are fairly new to Shadyside and don't understand why everyone acts so weird about the fact that they live on Fear Street. You'll find out soon enough, my friends. Mwahahahaha! *cough* Anyway, we get some descriptions of the siblings. Mark is a blond, dimpled cutie who I pray looks better than that jackass on the cover (no, I don't know when I'll shut up about the cover. The damn thing is so ridonkulous I can't take my eyes off it). He makes friends easily because Shadyside teens love a looker. In fact, that's really all it takes to be a success in this town. Blond hair + blue eyes + dimpled chin = world domination. Cara, on the other hand, is a little different. She has difficulty making friends and blames this on her twisted sense of humor and cynical world view. Folks, dare I say that we have a *gasp* INTERESTING main character that has more to talk about than psychotic teenage boys and the latest trip to Pete's Pizza? I'm keeping my fingers crossed that she doesn't take a turn for the worse about 50 pages in.
Cara rambles about her friends Lisa and Shannon and Mark's unhealthy obsession with his girlfriend Gena Rawlings. The fact that he spends nearly every waking moment with her or thinking about being with her *cough*possibly while touching himself*cough* is really pissing off his parents. Speaking of the parents, their job causes them to move a lot (six moves in the last eight years) which is why Cara doesn't bother to get close to anyone: "My mom puts me down a lot for being a loner, but what choice do I have? I mean, why get involved with people when you're only going to know them for a short while?" First of all, your mom sucks. Second, it will literally save your life if you stay away from everyone who even attempts to speak to you in this town. We get more useless info about the family and how sexy Gena is (she's a total slut). But back to the party. Things are getting a little nuts and Cara is trying to handle things alone because Mark is too busy exploring Gena's cavernous mouth with his tongue. The doorbell rings and Cara finds a police officer on the other side. She freaks out because she thinks something has happened to her sucky parents, but the cop just says there's been a burglary a few houses down and wonders if they've seen anything suspicious. She says no, he leaves his card and drives off. Cara informs the dirty degenerates that it's a school night and they need to go home. Everyone leaves and Cara and Mark take a look at all the crap they have to clean up. She wants to get it all clean before Ma and Pa get home, but Mark says they probably won't even show. Apparently, their parents are still young-ish and they can't seem to grow the hell up so they occsionally stay out all night partying. Like I said, SUCKY! The kids should not be sitting up all night wringing their hands in worry over whether their shitty, juvenile parents are coming home any time soon. They decide to call their parents' office, but the phone is dead. Typical. Then they hear someone walking around upstairs. It's R.L. Stine who has come to inform them they're trapped in his sticky Fear web and they're never getting out. Over his dead mole! Enough with that, though..you know I get deathly ill when speaking of The Growth. Anyway, it's not Mr. Stine at all. It's their creepy ass cousin Roger. He's very good looking, very shy, and slinks around the house like a lion stalking its prey. CHILLS! Roger lives in the attic or no apparent reason whatsoever. He goes to junior collefe and isn't the first boarder the family has taken in. "Other young guys have boarded with us in other towns we've lived in." I must admit I'm a little disturbed by that. Why is it always guys? Is Mom a cougar who sleeps with these poor souls before painting the walls with their entrails? Is THAT why they move so much? This book just got a lot more interesting. Yes, I know I'm sick. Roger has apparently been jacked up on something because he's completely unaware that a party was going on or that the defective parental units (purchased on the JCPenney layaway plan) are missing. Book Description:
Paulette Fox refuses to let her blindness stop her from living a full life. But one thing she's never done is fall in love--until now. Paulette knows Brad Jones is the only guy for her. Even when her friends see Brad commit a horrible crime, Paulette is sure that he's innocent. Her friends tell her he's out of control. That she will be his next vicim. But Paulette knows he would never hurt her. Is Paulette right about Brad? Or has her love put her in terrible danger?
My Description:
* Just from reading the description, many of my brain cells melted like candle wax. I dread this. Truly. *
Prologue
Some creep likes spying on the blind girl because he's totally hawt for her body and that somehow gives him license to stalk her. The end.
Paulette is in the car with her friend Jonathan Maddox who can't drive worth shit. Actually, Paulette (the BLIND one) could drive better. That's pretty sad, Jon. They manage to reach their destination (Shadyside Music Academy) in one piece. Apparently Paulette is a piano virtuoso. The caucasian female Ray Charles? Hell no. Jon drops her off and almost immediately after he leaves, some guy shoves her out of the path of an oncoming car. An oncoming car with no driver behind the wheel. "Someone forgot to set the emergency brake." Thanks, Jed. Jed's friend BRAD JONES is the hero here and Paulette is a smitten kitten, baby. Brad is a senior at Shadyside High who loves music but can't take lessons at the Music Academy because he's poor white trash so he works as assistant janitor there instead so he can scam on blind piano players. He says he also plays piano and thinks Paulette is better than him. How does he know? Because he listens to her play while he's hanging out in the janitor's closet on his lunch break eating sammichs. Anyway, Jonathan comes running up for some reason and Brad says he has to go so Jon walks Paulette to her lesson.
Later, Paulette and Jon are walking to Jon's car when Brad comes running up to get Paulette's number. Jon acts all weird about it and on the drive home, he tells Paulette that there are lots of rumors floating around about the magical Braaaaaad. Before Brad moved to Shadyside, he lived in Springfield where he got into plenty of trouble. Ooo! Since Paulette is an idiot, she doesn't believe it and says she'll ask him about it later. I'm sure he'll tell the truth and I'm sure your refusal to believe the "rumors" won't come back to bite you in the ass later. *sigh*
That night, Paulette's friend Cindy calls. BRAD gets brought up and Cindy carries on about how he looks like a movie star. She doesn't mention the fact that the movie star is Don Rickles. They talk about the rumors a bit, but Cindy doesn't seem to give a shit that her friend might soon be dating a criminal. Nice. They hang up and BRAD! calls a few minutes later. He acts like a damn freak telling Paulette that she's the one he's been looking for, breathing heavily into the phone like some perverted sex maniac and finally hanging up. If that shit isn't a warning sign, I don't know what is. He's got a neon sign that says LUNATIC: CRITICAL CONDITION blinking over his big fat head, but he's cute so Paulette will throw caution to the wind and...never mind. What a frigging moron.

Fear Street
Shadyside, United States
Re-capping (and making fun of) Fear Street novels and Point Horror novels by R.L. Stine. Join me, won't you? You know you want to... 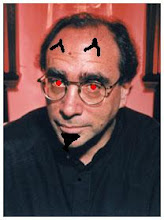